You know, a lot can happen when you start traveling down various rabbit holes around the Internet. One minute you’re looking for vintage Golden Girls commercials on YouTube, and the next you stumble upon a treasure trove of ads for Shoppers Drug Mart featuring none other than Bea Arthur!

I couldn’t find a lot of information about how Bea Arthur came to be cast in these ads for Canadian drugstore chain, Shoppers Drug Mart, but a Toronto Shopkeeper blog post from 2013 notes that the company saw huge growth in the 1980’s. In 1984 they unveiled a new slogan, “Everything you want in a drugstore,” which, lucky for us, included Bea! She starred in ads for the chain from 1985 through 1992. So without further ado, here’s Bea and her amazing style and comedic timing in these blast-from-the-past commercials!!

The colors and set from this ad from 1985 seem right out of The Golden Girls, and I have to wonder if Shoppers Drug Mart was referencing Dorothy’s job as a substitute teacher. Those giant gold earrings are fabulous!

Bea has a robot assistant in this next ad from 1987. I also like her jaunty black and white patterned skirt and shirt with the red t-shirt underneath.

Ok, I don’t even know what’s happening in this next one. Apparently it’s time to pump some gas right in the store, but obviously Bea’s bedazzled jumpsuit is the real star here!

It’s a bird! It’s a plane! It’s Bea! She channels her inner Superman to get to the 500th store celebration sale in this next hilarious spot.

Time for the floor show, everybody!

I don’t know about you, but Shopper’s Drug Mart seems like it was a super fun store! Bea is also wearing a very Dorothy dress in this ad.

Traffic jam on aisle 3! Also you could maybe win some Doritos, Diet Pepsi, a Swatch watch, or even the Ford Escort LX that Bea’s driving! Pure 90’s nostalgia here.

Finally, in this spot from 1992 Bea makes a joke about almost wanting a kid of her own that seems pretty ahead of its time. Actually, I don’t think an actor could even make such a joke in a commercial today without the company fearing the wrath of social media. Also, Bea is the undisputed queen of the long necklace! She looks lovely in fuchsia here.

I could watch these all day! There’s more on YouTube if you do a quick search for “Bea Arthur Shopper’s Drug Mart.” I just think it’s so fun seeing Bea put her comedic talents to use here, and these commercials make me think of my childhood and many hours watching Supermarket Sweep on daytime TV. Sometimes I really miss commercials like this that were straightforward and to the point, like Bea herself! That’s probably exactly why the chain continued to cast her in them for several years. It’s fascinating to see just how much commercials have changed since then, too. I hope you had as much as I did watching these! 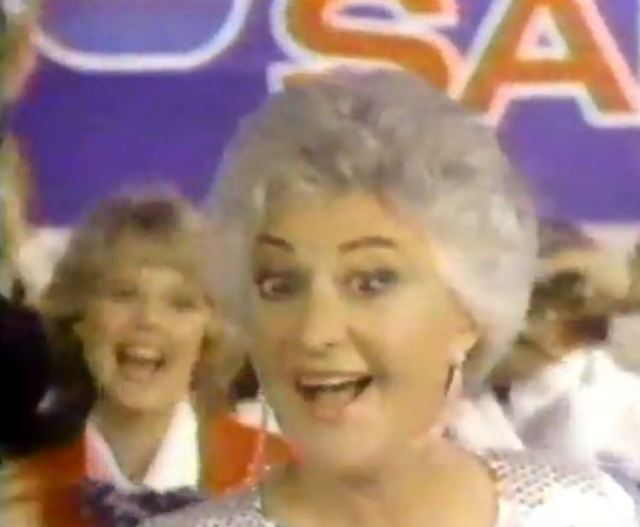