October 11 is National Coming Out Day and, in the course of my recent research, I’ve been thinking a lot about how The Golden Girls portrayed LGBTQ characters and issues over the years. The show tackled topics like coming out, AIDS, and learning to accept family members’ sexuality, among others, with sensitivity and humor in some pretty groundbreaking ways. Since Hulu began streaming the show in 2017, a lot more attention has been paid to these episodes. Younger audiences have re-visited and reconnected to The Golden Girls in ways that prove just why the show has remained popular since it premiered in 1985.

So, in honor of National Coming Out Day, let’s explore LGBTQ moments on the show with a timeline of The Golden Girls episodes that continue to inspire acceptance and equality.

Otherwise known as the pilot episode of the show, The Engagement is also notable for featuring the character of Coco. He makes his one and only appearance before Sophia steals the show. Although Coco is not identified as gay, Sophia describes him as “the fancy man in the kitchen,” and it’s become Golden Girls canon that he is.

As Megan Garber pointed out in The Atlantic, Coco “was part of that first show, in some part, because The Golden Girls was so revolutionary.” His presence, though brief, established how The Golden Girls would continue to feature LGBTQ characters and progressive topics in “slightly subversive” ways throughout the series. Coco’s significance on the show was also discussed in this excellent essay by Brett White.

In this episode from the second season, the first in the series to feature an openly gay character, Dorothy’s friend, Jean, comes to visit. Jean is a lesbian whose partner, Pat, recently passed away. Dorothy decides not to tell Rose and Blanche that Jean is gay, and they discover it for themselves as Jean ends up falling for Rose.

This episode also features the infamous “Lebanese” joke, among many other funny moments. I also really love the fashion in this episode, which includes Jean’s fabulous pink outfit and earrings (which show up in other episodes) and Rose’s teddy bear sweater. Ultimately, this episode stands out for depicting an LGBTQ character who faces some of the same challenges in life and love as the straight ones.

We meet Blanche’s younger brother, Clayton, for the first time in this episode from season 4. He’s in town for a visit and struggles with coming out to Blanche. Hilarity ensues, of course, but he does eventually tell Blanche that he’s gay.

Matt Baume‘s YouTube video about this episode and the one’s related to it is a must watch:

Matt does a really great job of connecting history and current events from the time to illustrate why these episodes are still important. He also notes how this episode originally aired shortly after the first National Coming Out Day, proving that The Golden Girls was just as often right on time as it was ahead of its time.

While this episode from the fifth season doesn’t actually include any LGBTQ characters, it is still one of the most memorable of the series because it dealt with issues surrounding HIV and AIDS that many in the community were dealing with at the time. It also showed that AIDS was something that could affect anyone. 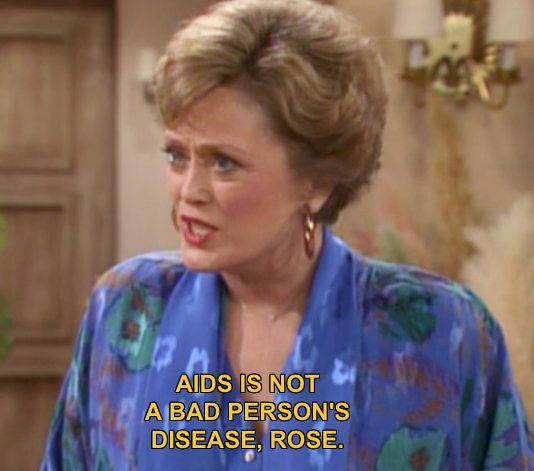 There’s a moment in this episode that touches me every time I watch it because you can see the genuine empathy on Blanche’s face when she tells Rose that “people who test positive have trouble getting insurance, jobs. It’s terrible.” All of the Girls were allies and advocates for the LGBTQ community, especially Estelle Getty. This episode wasn’t the first sitcom to feature the AIDS epidemic, but it’s had a lasting impact thanks in large part to the real life struggles of the writers and crew that informed the script.

By this time Clayton has come a long way in his journey as a gay man, and he’s ready to announce his marriage and stand up to Blanche when she’s still not quite ready to accept his relationship! Sophia is the most progressive of all again in this episode when she schools Blanche, and the audience, on queer love and marriage equality: “Everyone wants someone to grow old with. And shouldn’t everyone have that chance?” 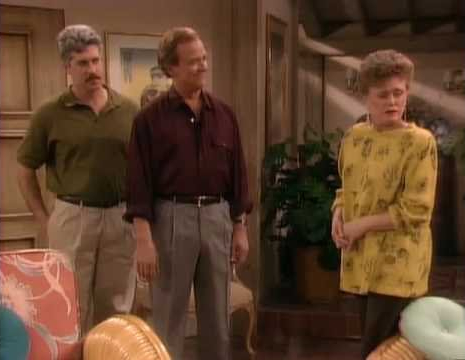 There are a lot of really great jokes in this episode that helped to explain the topic of marriage equality to viewers at a time when it was still a new and confusing concept for many. Again, watch Matt’s video to learn more about the historical connections to this episode. Also, cheeky episode title aside, one of the things I really like about this episode are the story arcs of both Clayton and Blanche. As Matt also points out, this story line reflects America’s changing attitudes towards marriage equality in the 1990s.

LGBTQ acceptance and equality has come a long way since The Golden Girls was on the air, with many people now feeling comfortable enough to share their stories not just with friends and family but on social media. And while the choice to come out is deeply personal and not required by any means for safety or other reasons, National Coming Out Day is an important moment to call attention to the continued need to fight homophobia and oppression. The Golden Girls would be proud!