So I thought I’d kick things off by discussing the fashion in one of my favorite episodes, Dancing in the Dark, from season 5. Click here to read a short synopsis and quotes from it. This is probably one of my top 10 episodes, honestly. It’s got great dialogue, some classic one-liners, and there is A LOT going on fashion-wise.

This episode features the infamous “Can you believe that backstabbing slut?” exchange, but my favorite line is actually another one from Rose. In the early days of her relationship with Miles (I think this is actually their first date after meeting at the ballroom in the beginning of the episode?), Rose has agreed to attend a party with him and his smartypants academic friends. One group is having that classic, insufferable “conversation” about who you would invite to dinner if you could invite anybody, living or dead. Trying to fit in, Rose gives it a try with some of Miles’ friends except she says, “If you could have any any two people, living or dead, to your house for dinner, what would you eat?” Kills me every time! Rose definitely wins at being the best dressed person at this fuddy-duddy party, though. Check out that handbag! The costume designer obviously decked Rose out in this fetching emerald skirt suit in contrast to the beige and khaki of everyone else, and I think that really emphasizes the point of this episode. Rose may not be the smartest book in the library, but she’s certainly the one with the most beautiful story, inside and out.

Sometimes, even though I’ve seen an episode many times, an outfit that I hadn’t really paid much attention to previously will jump out at me. Well, the other night when this episode was on was just such a time. I glanced up and BAM! Rose’s green windowpane matching jacket and blouse caught my eye. 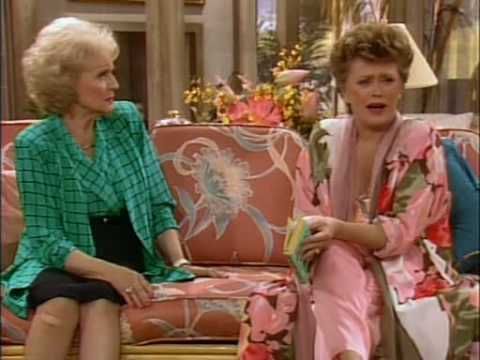 Although Rose is certainly not one to shy away from bright colors from time to time (the Foreign Exchange episode from season 4, anyone??), this particular set seems almost…garish for her. I also realized that I actually have a blouse with a similar pattern in purple in my closet. Blanche is wearing one of her classic satiny pant sets with coordinating long wrap in this scene. Can I just say how smart these outfits of Blanche’s are? And I mean that in both senses of the word. Smart as in well dressed, and smart as in she obviously chose them because they could go from the bedroom to the grocery store, if you know what I mean.

Also we need to talk about Blanche’s blazer in a later scene.

I remember variations of this pattern being EVERYWHERE in the late 80s and into the early 90s. Day-glo scribbles in highlighter and crayon from the early days of MS Paint is perhaps what passed for whimsy in 1989. Similar to Rose’s outfit above, though, I also feel that this jacket is a little out of character for Blanche. But even Southern belles have to try something new every now and again, right? Plus Blanche is supposed to work at a museum, and the structure of this outfit is definitely work appropriate.

Later, all of the Girls and Miles head back to the ballroom. I just love any episode where they get all dressed up for an event in their sequin finery! You know, just like Fay Wray, whatever happened to using sequins for design patterns? Now we tend to see gowns in just one color of sequins. I suppose the more sequins you use the heavier and itchier a dress gets, but the effect is certainly striking. Rose’s dress in this scene features that kind of effect. The ballroom is also beautiful with the swirling, twinkling lights and classic 1980s lattice background. It looks a little like a re-purposed Lawrence Welk Show set, which works for me and makes sense in the context of the scene. Dorothy and Blanche share a funny line about the disappearance of Glen Miller, too.

Unfortunately, Dorothy appears to be wearing some sort of horrid, stretch velour made from the discarded bodies of the Yip Yips from Sesame Street. That sea foam and butter yellow color combo is just too much, but it certainly looks comfortable. The shape and drape doesn’t bother me. It’s classic Dorothy. If the colors were darker I think I might like it better. The effect would be more elegant. It’s worth noting that Dorothy is supposed to have Chronic Fatigue Syndrome by this time, and she does remark that she feels like she did when she was 20, so perhaps the bright colors are meant to reflect that. Ok, Dorothy. A for effort! Both Rose and Blanche look wonderful in this scene. Here you can see the detail in their ensembles: 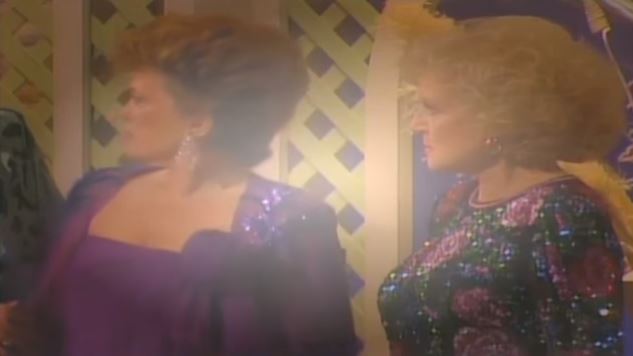 Sparkle, Rose, sparkle! This is definitely a dress to impress! And I love the–dare I say it–rose motif. I mean, if you have a name that can double as a pattern that you can wear then I think you definitely should. Blanche looks great in purple. She should wear jewel tones more often. The chiffon overlay perfectly accents her Gone With the Wind fabulous exit as she gallivants off to find her man for the evening.

This is just such a good episode! I think it doesn’t get its due compared to some of the other more well-known episodes but, for me, it’s pretty much perfect.

One thought on “Smartly dressed”

Support this blog and more

Get my neato Keep Calm and Watch The Golden Girls design on all kinds of merch in my Redbubble shop! You’ll be helping to support my writing at the same time, too. Funds will also be donated to the organizations listed at the left.