“The Accurate Conception” episode from season 5 is one of my all-time favorites. The dialogue and physical comedy are all spot on and, even though this episode is centered primarily around Blanche and her daughter Becky, all of the Girls have some great moments. The follow-up episode in season 6, “Blanche Delivers,” is also a good one. It’s interesting to look back on the original order of episodes in each season. For instance, this one aired after the “Sick and Tired” episodes, as if it marked a kind of a new beginning after Dorothy’s diagnosis of Chronic Fatigue Syndrome. Then “Blanche Delivers,” when Rebecca actually gives birth, is the first episode of season 6.

This episode also doesn’t get enough credit for being one that was ahead of its time. We often hear about “72 Hours” for discussing AIDS and “Dorothy’s Prized Pupil” for addressing immigration, but “The Accurate Conception” is notable because live birth as a result of artificial insemination had only recently been successful in humans since 1981 in the United States, and the procedure that Rebecca chooses and that’s actually discussed in fairly detailed terms for a television sitcom, had only been introduced in 1988. But enough about that for now because this episode is a treasure trove of fashion!

The episode opens with Sophia cooking breakfast in the kitchen, and Blanche’s daughter, Becky, is in town for some mother-daughter bonding time.

Blanche is wearing a beautiful Devarobe in this scene! The bright green and purple color combination would perhaps be a bit garish on most other people, but she pulls it off with panache as usual. The pale lavender nightgown worn underneath also nicely offsets the colors of the robe. Rose wears a pink sweater and pants set that’s very 1980s sportswear. Sophia’s cornflower blue (remember that color from your Crayola box?) is kind of odd. It’s almost a little utilitarian for her. And I really can’t stand that style of pocket, yet it seems to proliferate on clothing that’s designed and marketed towards “older” women, even today. I also can’t ever figure out just what exactly Sophia is cooking in this scene. It seems like it would be cookies, but this is supposed to be breakfast. 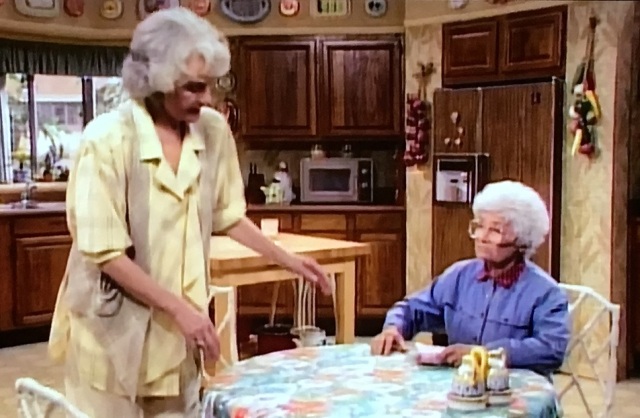 There’s also a silly B storyline going on in this episode in which Dorothy is trying to get Sophia to go for a check-up, but it’s rendered completely inconsequential with everything else that happens. I really like Dorothy’s outfit here, except I wish the bottom edge of the vest was straight. That angle makes it look like something out of a high school production of Oliver, especially with the weird little pocket. But the soft yellow and beige colors work really well on her! It’s like sands through the hourglass… The blouse also has a subtle plaid pattern, and the banded, elbow length sleeves are a bit of a rarity for Dorothy, too.

Next Becky and Blanche are having breakfast together on the lanai when Becky breaks the news that she’s “getting impregnated on Monday.” Now, there’s not much to say about what Becky wears in this scene–a short, pink robe, over a long t-shirt and socks–and Blanche is wearing the same thing as before, but her reaction after Becky tells her about the artificial insemination is priceless.

“Why would you do something like this? Just to hurt me?” Even a gif can’t capture the brilliance of Rue’s acting in this scene, but I thought I’d give it a try. She also follows it up with one of Blanche’s most memorable bits of dialogue:

“Oh. I see, missy! So, this is the thanks I get for all those cold nights when you were a baby, crying, and I’d have to get up out of bed and grope around in the dark for my slippers and robe, make my way all the way downstairs, and scream for the governess?!”

Basically Blanche spends the first half of this episode in her Devarobes, and I really love this one! I don’t know why, but I just think the soft colors are really pretty together, and the dot pattern is interesting. It seems modern but classic at the same time. Of course, Blanche’s attitude towards Becky is anything but modern in this episode.

Blanche can’t sleep, so the Girls have a late night nosh and discuss Becky’s decision amongst themselves. Why it’s chocolate cake and not cheesecake, I don’t know. And grapes? Gotta at least try to stay healthy, I guess. Rose is in green this time, wearing what seems like a very St. Olaf house coat. The lace is pretty, if a touch old fashioned, but on Rose it works. Sophia is wearing her trademark yellow terrycloth robe (and purse!). I wonder how many times that robe appears throughout the whole series? Dorothy’s robe is the standout here, though. I really love the stripes and color combination.

Sophia tells the story of how Dorothy was conceived behind a sausage and pepper stand, and then Rose tells one of her signature St. Olaf stories about how her children were conceived. “Then there was the Day of the Wheat when everybody came to town dressed as sandwiches. Charlie and I forgot to put cheese between us and before I knew it, there was Kirsten.” Interestingly, she also mentions two of her other children, Adam and Janella, who I don’t think are ever spoken of again! Totally weird. Who the hell is Janella??

In the next scene Blanche tries to pretend she’s feeling better by making dinner plans with Dorothy and ignoring Becky. Blanche breezes into the scene in a blue and teal ensemble. The open jacket also has purple piping, and the length is nice if a bit boxy. Somehow that shape works on Blanche, though. And I would never have thought of wearing such a bright pink blazer with army green pants, but it actually looks great on Becky.

Blanche really pulls out all the stops here, calling her decision “this crazy baby thing” and getting all huffy. But I love how Becky stands up for herself in response. This is also a moment when the softer colors and shapes that Sophia and Dorothy are wearing help to contrast the drama that’s otherwise going on. Sophia’s cardigan is also really cute! Whatever she’s knitting seems a little scary, though. Maybe she’s planning to give it to Rose for Christmas.

The next morning Becky has found a sperm bank “not far from here,” even though she had supposedly already planned to get inseminated on Monday.

Again with those awful pockets on Becky, and Blanche is in another Devarobe. The pattern on this one is busy and colorful, almost feisty like Blanche herself! Dorothy has a hilarious response to Blanche wondering what one wears to a sperm bank after she finally agrees to go with Becky and the other Girls. “Something attractive in rubber.” Blanche replies, “I have that…” because of course she does.

The Girls and Becky (who is now going by her full name, Rebecca, as Blanche becomes increasingly frustrated) spend a fair amount of time in the kitchen discussing actually going to the sperm bank. Sophia agrees to get that pesky check up so she can tag along. Somehow that happens in the same day. The timeline in this episode is really off, but by this time there have already been enough outfit changes that I guess it makes sense on the surface until you stop to think about it. Sophia’s house dress is my favorite here with its smocked collar and delicate floral pattern. She definitely rivals Rose for who looks better in pink! Dorothy is in beige again only this time with a long, green, foliage print dress over it. She’s the queen of layer as always. There’s a lot of cooking going on in this scene for no reason really. Rose is wearing a picnic tablecloth apron over a periwinkle pantsuit, and the top underneath the blazer is more than a little odd. You can see it better below.

It has little bows going down the middle, and I can’t figure out how I feel about them. They’re kind of cute but also just a little too twee. But again, the contrast is evident with Blanche and Becky’s outfits which are all business. Lots of gold jewelry going on here as well, and Blanche definitely looks like the queen bee in her black and yellow skirt suit set.

There are so many great lines when the Girls finally get into the doctor’s office.

Blanche: “Just what in the hell are we doing here? I feel like I’m in the middle of some awful dream, yet I know it can’t be a dream because there are no boy dancers! … You are a Devereaux! And a Devereaux has never had to pay for it! I certainly haven’t!”

Dorothy: “She’s always depended on the kindness of strangers.”

Blanche storms out because she doesn’t want a “test tube for a grandson.” Sophia makes sure to ask the doctor before she leaves if they “have any Tony Bennett[s] socked away.” 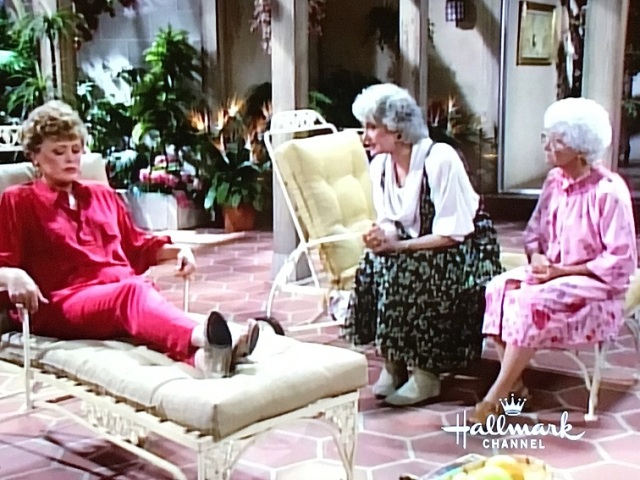 The Girls arrive back home to find Blanche sunning herself on the lanai, again trying to pretend like nothing is wrong. She’s changed into a cranberry colored pantsuit because I’m sure her own governess spent a lot of time impressing upon a young Blanche that ladies should never wear the same pant suit twice in one day. Sophia is a woman after my own heart, apparently changing straight into her house dress as soon as she walked in the front door! They have a quick heart to heart with Blanche and wrap up the episode by finally convincing her to see Becky as a grown up and support her decision.

Overall, I think this episode is interesting because, yes, it was a little ahead of its time in tackling this issue, but the attitudes displayed by the Girls are now outdated. The phrase “test tube baby” is one that we almost never hear anymore, and for good reason. I also think it’s funny how this episode is about reproduction and conception yet the word “sex” is never said once. The Girls continually say “the old fashioned way” or “it.” I wonder if that was something to do with television at the time or if it was a deliberate choice on the part of the writers to contrast old and new attitudes. Either way, this is a standout episode for fashion, both in terms of casual and sportswear. Sometimes I don’t realize just how many outfit changes there are going to be when I decide to write about an episode, and this was definitely one of those.

Along with the fashion, I tend to get interested in other details of the show, so I’ve decided to do a series of posts focusing on each year that The Golden Girls was on the air, in order, starting with 1985, of course. These posts will cover fashion influences of the time as well as history, politics, and other pop culture elements. Stay tuned!