As we all know, the Girls met thanks to a want ad that Blanche put on the Neighborhood Notices board at the local Miami supermarket. We see this at the end of the first season in the flash back episode titled “The Way We Met.” The rest is TV history, of course, which is why I thought it would be fun to take a look back at some of the print ads and articles that promoted the show over the years in TV Guide.

The Golden Girls first appeared in the Fall Preview issue of TV Guide in the same week that the show premiered in 1985. The ad for the show is after the images below, but I also wanted to show the Girls’ first cover from just a few weeks later in October. Although the “no-spring-chicken humor” headline isn’t my favorite, the fact is that the show was a hit from the very beginning.

Here’s the first ad from the Fall Preview issue. All of the Girls look lovely, and it’s interesting to see Estelle without all of the makeup that she would wear as Sophia. I’m sure Blanche wouldn’t mind being so close to the hunky Mark Harmon, either!

The hilariously titled article below was published in the October 19 issue with the Girls on the cover. It introduces readers to the new “over the age of 30” cast, even giving a nod to Bette Davis who appeared on the cover of People magazine in her late 70s at the time. I love the little palm tree inset, too.

Here’s the lineup spread from the same week: 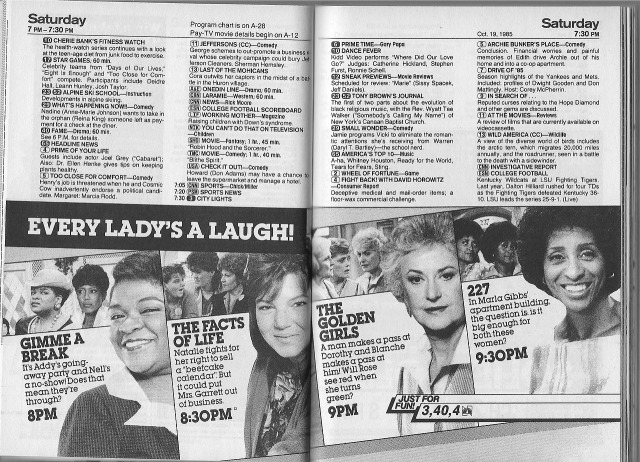 I’ve never really been that much of a Facts of Life fan, but I do love me some 227! Gimme A Break is also great, although I haven’t seen it on TV in awhile. What I like most about this ad, though, is the recognition it gives to funny women.

Next, I really love this ad from 1986 that lets each Girls’ personality shine. I also like how it plays on the Cyndi Lauper song and gives prominence to the women living full, interesting, and fun lives on the show. Plus, it’s just designed really well. I’d watch the show based on this ad if I knew nothing about it!

The exceptionally beautiful cover below is from the week of January 31, 1987.

It was illustrated by Richard Amsel, who also designed many other notable TV Guide covers as well as movie posters and album covers. You may be familiar with his posters for Raiders of the Lost Ark and The Dark Crystal or his cover for the Bette Midler: The Divine Miss M album. You can see more examples and analysis of his TV Guide covers at We Are the Mutants. Amsel passed away from complications from AIDS in November of 1985, but I haven’t been able to find any further information on when exactly he completed this cover and why, possibly, TV Guide waited so long to feature it. He could only have seen the pilot or a few episodes from the first season, at most, before his death, and yet he managed to perfectly capture the spirit of the series. Looking closely, you can see that the illustration is a kind of composite of the two promotional photos used on the first TV Guide cover and ad, so perhaps the original dates of those photos is a clue as to when Amsel originally designed the cover.

Also from 1987, this ad for the third season premiere promotes the Girls’ certified reign as comedic greats:

Here’s a nice interview with Rue from 1990 that discusses some of her real life similarities with Blanche as well as her own personal transformation.

Finally, this is a fun ad for the 1992 crossover episodes of The Golden Girls, Empty Nest, and Nurses. The Girls’ episode is “A Midwinter Night’s Dream.” It was a special hour long episode and guest starred Dinah Manoff and Kristy McNichol from Empty Nest. Betty also guested on Empty Nest and Rue appeared on Nurses. I’ve seen the Girls’ episode, obviously, but it would be fun to watch all three together now and relive the 90s TV madness!

Believe it or not, TV Guide is still being published, but I don’t think the covers are nearly as fun or unique. You can browse through the covers by decade at the TV Guide Magazine Cover Archive. There is a definite change in style by the 1990s when larger, bolder fonts became the focus with less emphasis on artistic illustration and layout. The great Hirschfeld did a cover for Ally McBeal in 1999, though, but definitely by that time and into the current era there is a focus on trying to cram as much text and content onto the covers as possible.

I hope you enjoyed this little journey through TV Guide over the years! Sometimes I think it’s fun to explore fashion in the broader sense of the word. 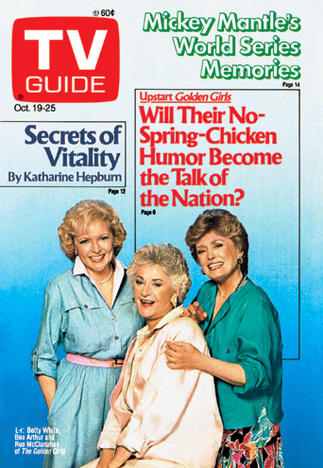