Portions of this post were originally presented as part of Realizing Resistance: An Interdisciplinary Conference on Star Wars, Episodes VII, VIII, & IX, May 2-4, 2019.

Not so fast, Boba Fett! The infamous bounty hunter may have made his on-screen debut in The Star Wars Holiday Special, but it’s Bea Arthur’s performance that’s truly the stuff of legend. The Holiday Special aired just once on CBS on November 17, 1978 and instantly became a thorn in the side of the franchise. Carrie Fisher once joked that she would play it at parties when she wanted people to leave at the end of the night, and Mark Hamill confessed last year to never having watched it all the way through. But thanks to Bea there’s at least one scene in the show that’s worth remembering.

Bea plays Ackmena, a bartender at the Mos Eisley Cantina. We’re in for a treat because not only does she serve drinks, but she sings, too! The scene opens with a sort of spoof public service announcement from the Imperial Council that the next segment is “required viewing” for members of the Imperial Forces and depicts Life on Tatooine. The narrator then tells us that it’s “brought to viewers everywhere in the hope that our own lives may be uplifted by the comparison” and “is hereby begun without further comment as to its lack of moral value” since it takes place in a bar and we might actually have some fun for a few minutes. We see some familiar faces such as the Cantina Band and even Greedo, and then there’s Bea, serving drinks to some dubious aliens with her trademark wit as Ackmena. She then has to fend off the pestering advances of Krelman, played by Harvey Korman. The fun doesn’t last for long, though, because the Imperial Council breaks in and imposes a curfew on Tatooine. Finally, this leads to Bea’s big musical number since she has to announce to everyone that the bar is closing.

In 2001 Bea briefly discussed her part in the Holiday Special during her interview for the Archive of American Television. Funnily enough, the interviewer asks about her appearance on Star Trek rather than Star Wars. Oops! In the interview Bea notes that she was cast in the part of Ackmena thanks to her friendship with Ken and Mitzie Welch, two of the show’s producers. They also wrote the song, “Goodnight, But Not Goodbye,” that Ackmena sings during her scene. Like any reasonable person, you’re probably wondering why Bea agreed to appear in this show in the first place, given its reputation. Although she also says in the interview that she “was never into the whole Star Wars thing,” it should also be noted that she couldn’t have known just how wacky the show would turn out to be. No matter, though, because she also recalls it fondly and looks like she was having fun in other photos from the set. The show’s producers were hoping to capitalize on the success of the first Star Wars film that premiered the previous summer with the television special format that was still popular at the time.

While the Holiday Special has never been officially released on any media source, you can watch and judge for yourself on YouTube. Bea’s performance is about an hour and eight minutes into the whole thing, if you want to skip ahead. One of the Holiday Special’s biggest problems is that it’s simply too long. With commercials, it clocks in at almost two hours, while the running time for most variety specials of the era was generally an hour. I think if they had condensed it and edited out some of the weirder scenes then it wouldn’t have been quite so awful.

Other than the Boba Fett cartoon, Bea’s scene in the Holiday Special really is the best part. My favorite bit is when she sits down next to the giant rat. “Just one more drop, friends. Before we stop, friends. One more moment face to face,” she sings with complete sincerity as only she could. It’s obvious that a lifetime on the Broadway stage prepared her for such an out of this world production. Perhaps because I’m such a fan of both Bea Arthur and Star Wars is the reason why the Holiday Special is so endearing to me. Its got its issues for sure, but it also stands as a relic to a bygone era of television variety specials the likes of which we no longer see. 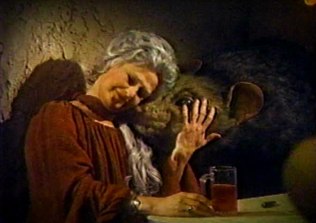 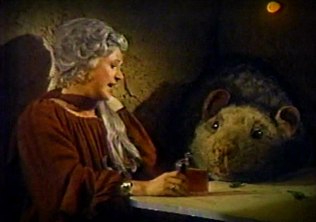 Reviews of the show from 1978 consistently note Bea’s performance as one of the few aspects deserving of any sort of praise. The newspaper clip below notes that,

One of the things I love the most about the Holiday Special is that it’s inclusive. It’s sometimes erroneously called the Christmas Special, but it’s not about Christmas at all! In fact its main focus is the Wookiee holiday, Life Day, that celebrates family, joy, and harmony. Carrie Fisher also sings a lovely song about those very things at the end of the show. Bea’s appearance in the special continued to be noted in newspaper articles over the years, and interest again increased online with the recent Star Wars films and the renewed popularity of The Golden Girls since the show began streaming on Hulu in 2017. Suddenly there was something new in the Holiday Special that had to be seen to be believed by a whole new legion of fans!

Recently, SYFY Wire highlighted Bea as its Chosen One of the Day in her role as Ackmena. There’s even talk of a new holiday special for Disney Plus. It would be so fun if they could figure out a way to give Ackmena another appearance for just one more round, don’t you think?

The Dark Side: An Oral History of ‘Star Wars Holiday Special (Fakuto)

3 thoughts on “Bea Arthur in The Star Wars Holiday Special”