Welcome to the first of two posts for LGBTQ Pride Month! Somehow I missed writing something for the occasion last year, so this year I wanted to do something special. There are already lots of wonderful articles out there about why the show connects with LGBTQ audiences and how it tackled topics ahead of its time, including one about this post’s special guest. 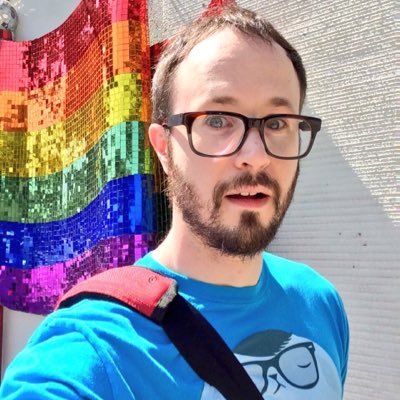 Matt Baume is a creative tour de force as the host and author of several projects that explore how entertainment continues to change people’s lives. His ultimate goal is “to make the world a better place by making people happy and making people think.” I’m a big fan of his Culture Cruise videos on YouTube so I decided to get in touch with Matt to learn more about him and his love for The Golden Girls.

You’re the creator of so many amazing projects! Tell us a little about them.

Whew, I’ve got so many — basically, I produce smart, fun media with a queer point of view. I’m co-creator of the podcast & live show Queens of Adventure, featuring drag queens on an Dungeons & Dragons quest, as well as the LGBTQ interview podcast The Sewers of Paris, the YouTube pop culture series Culture Cruise, and the LGBTQ news shows Weekly Debrief and Marriage News Watch. My book, Defining Marriage, chronicles the personal stories of people who fought for marriage equality over the last forty years.

How long have you been a fan of The Golden Girls, and what are some of your favorite moments from the show?

I’ve been a fan since college in the late 90’s, when one of the people I lived with introduced us all to the show. He would watch Golden Girls every day on Lifetime, and we’d gather around and quickly discovered that we loved it as much as he did. It’s hard to pick a favorite moment, but I think the scene where Sophia explains to Blanche why two men would want to get married is extremely touching. And I love everything about “Miami, You’ve Got Style.”

I know you best from your Culture Cruise videos. What inspired you to create this series?

I love talking about the way that media depicts the lives of queer people — the good and the bad. Because entertainment shapes so much of our perceptions of ourselves and each other, there are a lot of stories behind the stories told on TV and in movies. I started doing Culture Cruise to show people just how interesting those LGBTQ milestones are, and the impact they had on the world.

In your Culture Cruise video, “The Golden Girls’ Gay Journey,” you break down how the show dealt with marriage equality and queer identity during the late 1980’s. Could you explain a little more about how the characters and situations in episodes like “Scared Straight,” “Sister of the Bride,” and even “72 Hours” mirrored developments in politics and real life at the time?

TV was still very skittish about gay characters when those episodes aired, skittish about AIDS, and completely avoidant about talking about both at once. (Designing Women tackled the issue, but few other shows were willing to go anywhere near the topic.) By introducing Blanche’s brother as a gay man, Golden Girls gave viewers a more wholesome look at the lives of queer people — here was a guy who was very buttoned-down and had his life together. All he wanted was the acceptance of family, first for living his life openly and later for falling in love. That’s a pretty understandable impulse, and it aligned with the growing activism among LGBTQ people to have their lives and relationships afforded equal legal status.

I also love the connection you make to Sex and the City in your recent Culture Cruise video, Maude’s Gay Friend, along with the episode of Maude from a few years later, The Gay Bar. How do you think Maude and The Golden Girls have impacted representation of the LGBTQ community and women on television?

Although both shows have touched on homosexuality, in general I think both shows have had a much larger impact on the perception of women. By portraying the characters as smart, funny, independent leaders (and also human and flawed on occasion!) Golden Girls and Maude did a lot to bring the ideas of feminism to mainstream audiences. And I think one of the most remarkable aspects of The Golden Girls is that the characters are senior woman who also have sex lives! It’s not a common way to portray those kinds of characters, and it really broadens our understanding of how rewarding life can be in spite of social expectations.

Why do you think it’s important to make historical connections to television and popular culture?

TV and pop culture tell contemporary stories about what life is like. I wouldn’t necessarily say that they’re always ACCURATE stories — I wouldn’t turn to The Golden Girls for an authentic depiction of life in late 80’s Miami — but they reveal a lot about what was on the mind of culture at the time they were made.

What do you see as the ultimate legacy of The Golden Girls?

I think the values of companionship, sisterhood, and tolerance infuse every episode of the show — I hope its legacy is to guide people to be kinder to each other.

Big thanks to Matt for taking the time to answer my questions! I hope you enjoyed this interview, and you can learn more about Matt’s projects on his website, YouTube, or follow him on Twitter. Also consider becoming a subscriber on Patreon to access even more of his fantastic and informative content.

Stay tuned for next week’s Pride post that will take a look at how a specific reference from The Golden Girls relates to LGBTQ history!

3 thoughts on “Interview with Matt Baume”