I love the running joke throughout the series that Blanche is a cheapskate when it comes to home repairs. From the bathroom to the roof, she’ll do just about anything to put off paying for repairs for as long as possible. Installing a hot tub, though? Now that’s another story! The season 4 episode, “The Auction,” is sort of an under appreciated episode of the series because, while perhaps not as memorable as others, it does feature a few choice moments and quite a lot of fashion.

The episode opens with the Girls discussing the roof leak that happened overnight, and I think Dorothy looks quite lovely in this first scene. Her hair and makeup are styled beautifully. The tunic she’s wearing really works on her, too. I like the contrast of the magenta (or is it fuchsia? The eternal debate…) cowl neck and sleeves against the purple flowers. This kind of floral pattern isn’t one we see very often on Dorothy, either. Sophia opens the mail while wearing a burgundy cardigan with white buttons along with her signature purse. But my favorite part of the scene is when Rose enters, although not because of what she’s wearing. We see her in this sweater several other times. It’s the pink buckets! 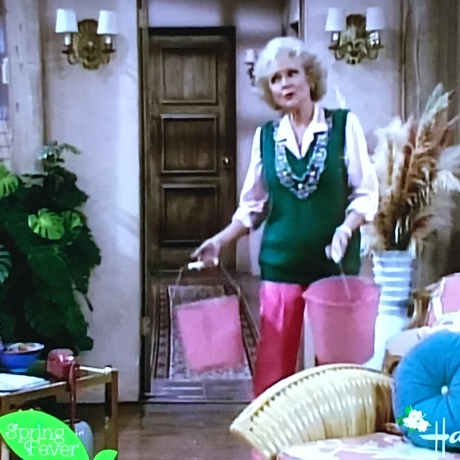 I just love that the art directors went to the trouble of finding buckets in that signature shade of pink! And of course there’s Rose’s fantastic response to Dorothy asking her if the roof leaked in her room, too:

No, Dorothy. I just finished milking the cow I keep in my closet. Gee, with only three hours’ sleep I can be just as bitchy as you!

It’s the best when the writers let sarcastic Rose come out to play! Blanche calls the repairman, and the Girls find out that it’s going to cost ten grand to fix the roof, so they decide on a patch job for now. The next scene sets up the Jasper DeKimmel part of the story line.

Blanche is also wearing a very interesting, casual sportswear outfit in this first scene. The yellow cardigan has a striped border detail that changes from blue to green going around the neck. It’s also fairly short, with the hem stopping right at the top of her hips, which is an interesting contrast from her usual flowy looks. A fellow fan on Twitter also noted that she wears this cardigan a few episodes later in “You Gotta Have Hope.” Dorothy and Rose decide to go with Blanche to the art opening featuring the work of Jasper DeKimmel at the museum where Blanche works that night. Rose really does have most of the best lines in this episode. Blanche attempts to explain the concept of DeKimmel’s nonrepresentational style of art to her and Dorothy, saying that the “spot of orange up here in the corner…stands for the planets and man’s eternal struggle against nature and the elements” on a brochure for the show. Rose responds, “No, it doesn’t. That’s where I put my Creamsicle down this afternoon when I answered the phone. See? It rubs right off!” Take that, modern art!

Next we see the Girls in the art museum, and it’s such a fantastic set! It’s almost too 1980’s for words. Of course, it’s really more like a gallery than a museum, which is where I think Blanche usually refers to working at. I’m not sure why they changed it to a museum in this episode, unless I’m mis-remembering. Anyway, the fashion is this scene is quite the mix. Dorothy is wearing a sort of deconstructed tuxedo, and I particularly like the open jacket and the pants. It was difficult to capture the maroon color and the satin lapels, but Dorothy describes herself in this scene as looking “pretty damn good,” and I would have to agree, even if Sophia didn’t. This outfit retains the relaxed silhouette that she’s famous for while also still looking really sophisticated. The blouse also has interesting detailing, and I feel like she’s probably worn it before under some other vest. Now, Blanche is wearing a pale blue pantsuit in that stretchy crinkle fabric that used to be everywhere in the late 1980’s and early 1990’s. I don’t quite know what to call it, but it has been making a bit of a comeback. I sat next to a woman at the ballet recently who was wearing a dress made out of it, except it had a velvet texture. Again, for Blanche, this is a unique choice. I think Rose’s dress is the real standout, though. I love the bright cobalt color and the sequin detailing at the waist. Sophia was also in this scene in a black dress with sequins at the neckline, but somehow I didn’t get a photo of her. There was also a mime. I think Hallmark cut that scene, though, because I didn’t recall it until I watched the scene again on YouTube.

So Jasper DeKimmel turns out to be a real jerk, first insulting Rose’s shoes (which I liked, even if Blanche agreed with him) and then all of them after he attempts to explain his crappy art. Maybe it’s because I was an art history major in college, but I just love what a perfect stereotype the writers created with DeKimmel, right down to his name. Back at home the next day and the roof is leaking again, this time in the living room. This scene is hilarious and probably the most memorable of the episode. 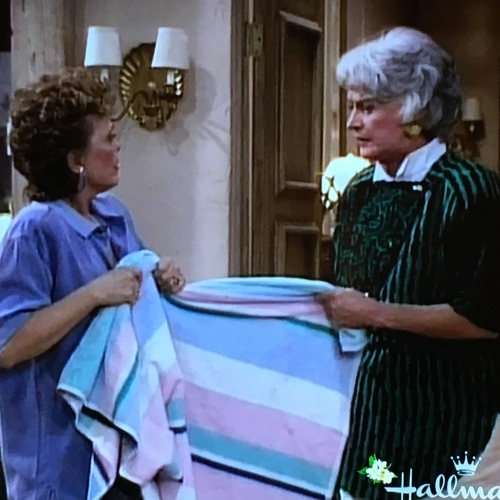 Blanche: Wait a minute, Rose. Is that my Cabana Club beach towel you have there?
Rose: Is it this one with the naked man and woman being swept up in the waves?
Blanche: Yes, that’s it. You can’t use this towel.
Dorothy: Blanche, Blanche, it’s an emergency! We’ll replace it next week.
Blanche: Oh, no, you cannot replace this towel. There are too many fond memories attached to this towel.
Dorothy: Blanche, please. I am in no mood to hear about the parade of endless sexual encounters that you have experienced up and down the Florida coastline
with only this towel between your hot flesh and the cold, wet sand!
Blanche: I brought my son Skippy home from the hospital in this towel, Dorothy.
Dorothy: You’re lying, Blanche.
Blanche: Damn, you’re good!

Skippy?? I’m pretty sure this is the only time we ever hear Blanche mention that kid! There’s quite a lot of incongruity going on with the outfits in this scene, with Dorothy’s being somewhat fancy and Blanche and Rose dressed much more casually. Dorothy engages in some interesting pattern mixing here. Her top features wavy black stripes against a green background with a contrasting placket in a sort of tapestry pattern attached with round gold buttons. It also features a white tuxedo style collar that seems unnecessary. Perhaps mercifully, Blanche and Rose are each dressed in one solid color, periwinkle and pink respectively. Actually, I think Rose might be wearing the same pants from the opening scene just with a matching blouse this time. I also love this scene because we get one of Dorothy’s withering glares and Blanche’s stares where she narrows her eyes after the towel exchange.

The Girls discuss their options for collecting enough money to pay to get the roof replaced when Sophia comes home from volunteering at the hospital. It turns out DeKimmel is dying, and of course there’s also an auction of his work scheduled for the very next day. What a convenient coincidence! They hatch a plan to attend and buy one of his paintings that they can then sell for a higher price after his death to pay for the roof. But not before feeling a little late night guilt. We’re treated to lots of lovely sleepwear in this scene, including a repeat of Dorothy’s Battenburg lace nightgown and a very appropriately artistic Devarobe.

Back at the art museum it’s showtime for the auction! This art museum set is so wild I can hardly get over it. From the walls to the chairs to the other art pieces on display, this is yet another instance of production designer, Ed Stevenson, and the art department going above and beyond in creating a memorable set. There’s also some pretty amazing 80’s hair going on with the auction assistant here. The scene itself is hilarious, too. Rose keeps raising her auction paddle and accidentally bidding on the wrong painting. In the end, they win the one they came to bid on.

The Girls’ outfits in this scene are very quintessentially 1980’s, especially Rose and Blanche’s dresses. Both are sort of Jessica McClintock for the older set with the ruffles and puffed sleeves. The top of Rose’s dress almost seems like it’s made out of the same fabric as Blanche’s pantsuit from earlier, just in more of a seafoam color. I’m really not a fan of this dress on her. It’s definitely a departure from her usual style, although her formal dress looks usually feature a looser silhouette than her casual or business dresses. Dorothy echoes her earlier look with another tuxedo inspired jacket, this time featuring a large brooch. She’s pinned it rather low, which is interesting. Now, Blanche’s dress is truly my favorite in this scene. I love the emerald color and the style as well as the gold necklaces she’s paired with it. The fabric reminds me of the dress she wore in the “End of the Curse” episode from season 2, which she also accessorized with a long necklace.

The episode ends back at home, and the girls are stuck with the ugly DeKimmel painting because–spoiler alert!–of course he didn’t end up dying. But it all works out in the end because it turns out the repairman is a fan who’s always wanted to own an original DeKimmel, and the Girls make a deal to trade the painting for the roof repairs. Which, considering the original estimate was for $10,000 and they bought the painting for $9,000, I guess that means they came out ahead. Lucky for them they’ve got Sophia, and at least she knows how to drive a hard bargain! She goads him into giving them a new roof with a 5-year warranty and $3000 more for the painting. Nice work, Sophia! Her dress is also my favorite in this scene. I love the stripes and the detailing at the top of the bodice. Blanche’s outfit is my other favorite here. The soft pink is usually a color we see on Rose, but it’s working quite well on Blanche. 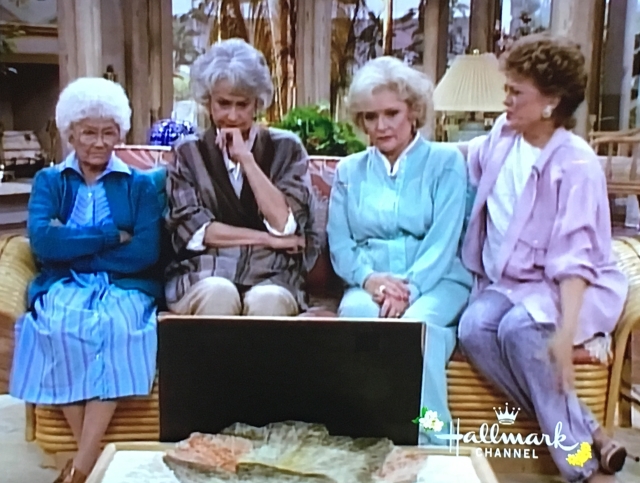 This is a pretty stereotypical sitcom ending, in which the characters went through a lot of trouble to solve what is essentially a pretty simple problem, but I think this episode had a lot of fun with the concept. I also like that we got to see so many different outfits on the Girls, from casual to dressy. Did you have a favorite? Let me know in the comments or on Twitter!

2 thoughts on “Raising the Roof”