No, not the men–that could fill a book–the set design! From the famous wallpaper to the pink chairs and other details there’s no doubt that Blanche’s boudoir is the one that rules them all. It’s one of the most memorable sets in television history, so let’s take a tour through the banana leaves and explore just what makes Blanche’s bedroom so marvelous!

We get our very first glimpse of Blanche’s bedroom in the pilot episode. In fact, most of the clips from the show’s famous intro were taken from the pilot and the scenes in the bedroom. Blanche is sitting at her vanity table full of perfumes and potions deciding what to do about some guy named Harry’s marriage proposal. Right away, her famous bedspread and wall splash are front and center! I also adore Blanche’s dress in this scene. In fact, I like this dress better than the one that she almost marries Harry in. It’s got that sort of toned down disco look that was popular in the early to mid 80’s, and the beaded shoulders are perfection. 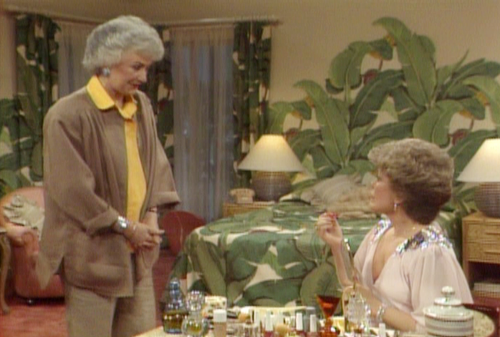 I love the story about the bedspread and how the wallpaper-as-headboard came to be. John Shaffner, the show’s assistant art director, relates the story in Jim Colucci’s Golden Girls Forever book. Production designer Ed Stephenson requested the infamous wallpaper from the start, and they decided to cut the leaves out one-by-one and glue them to the wall since they didn’t have a headboard. They also had a matching bedspread made, which was expensive in 1985. Shaffner used it on his own bed in between shooting the pilot and the next episode of the show because he was afraid it would get lost. Now that’s dedication!

It’s no wonder that Blanche’s bedroom has become so iconic because Ed Stephenson was already an accomplished art director when he started work on The Golden Girls. He won his first Emmy in 1959 for An Evening with Fred Astaire and went on to win two more over the course of his career. Stephenson had also previously worked on both The Betty White Show and Maude, among many others. He was also nominated for an Emmy for Outstanding Art Direction for a Series for his work on the pilot episode of The Golden Girls.

I love how this photo shows more of the detail on the bedspread and how the leaves were sewn to accentuate their individual shapes that gives it a quilted, textured look. You also get a sense of what Stephenson was going for with this immersive design that so perfectly matches Blanche’s personality. 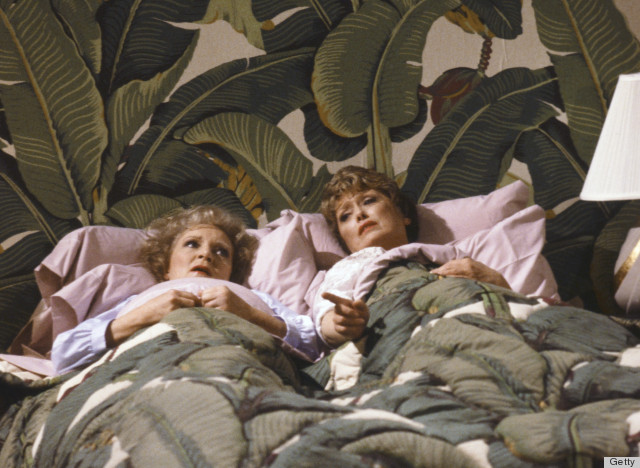 I think the decision to use the wallpaper instead of a headboard was also very innovative for 1985. Unique headboards and other trompe-l’œil touches have since become interior design mainstays.

The wallpaper design is actually called Martinique, and it was created by Albert Stockdale, a botanical illustrator, for the Los Angeles-based CW Stockwell design company in 1942. The Hollywood fashion designer and decorator, Don Loper, installed it in the Beverly Hills Hotel’s Fountain Coffee Room in 1949 where you can still see it today. Note how the napkins and chairs also closely match Blanche’s room. 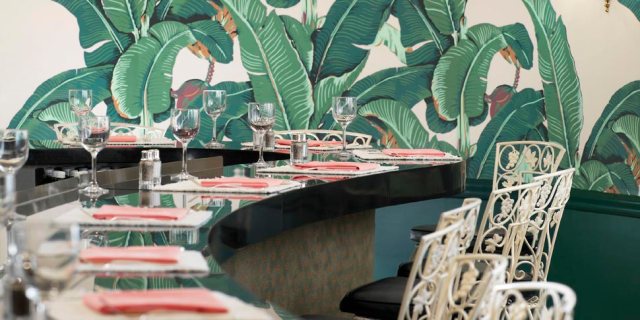 Over the years, the design has often been erroneously attributed to Loper, but Architectural Digest helped set the record straight in 2019 when the Stockwell brand was re-launched. It turns out that company president, Lucile Chatain (daughter of the founder, Clifton W. Stockwell) found inspiration from a vacation with her husband to the Bahamas and asked Stockdale to illustrate the now instantly recognizable design. That’s a lot of “stock” to put into one print, but it’s been a favorite ever since and remains a popular decorating choice.

Aside from the obvious reasons of it just being such a fabulous space (isn’t it everybody’s favorite?), I think I probably like Blanche’s bedroom so much because it reminds me a little bit of my grandma, Nonnie, who was also fond of shades of rose, green, and wicker furniture. Like Blanche, she had a room in her house that featured some wallpaper that veered towards the ostentatious. It’s still known in our family as “the rose room,” and I got sad recently when it occurred to me that I don’t think we have any photos of that room. With that in mind, let’s take a look at this often overlooked little corner of Blanche’s room while Dorothy adjusts her suit: 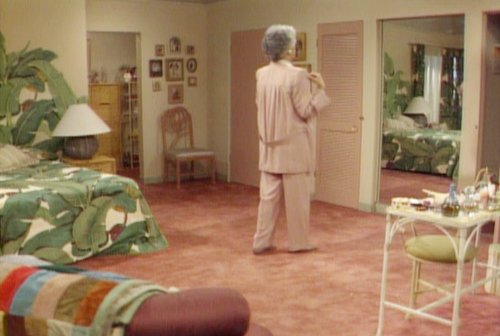 It’s the careful grouping of picture frames over the chair that catches my eye. As we see in many episodes, Blanche had a somewhat tenuous relationship with most of her family. They often didn’t see eye to eye at first, but of course Blanche came around or made amends in the end. I think this grouping of photos shows that she cared deeply about her family, and it’s a lovely touch on Stephenson’s part. There are also other picture frames around the door that can be seen briefly as Dorothy enters the room. It’s just another one of those details that makes the set of The Golden Girls seem so much more real and lived in than others.

Throughout the seasons, certain decor elements of the room also change, which makes sense. I’m sure Blanche would’ve redecorated her room at some point in seven years. Here there are different chairs and an antique looking mirror on the vanity table. I’m not sure which episode the photo below is from, but it’s not the pilot since the chairs are a different style. Actually, these chairs are my favorite, too, and seem to best match the overall style of the room.

Later on there’s a new, sleaker vanity and incidental table between the chairs (which have changed yet again), this time in green, and a fancy lighted mirror! 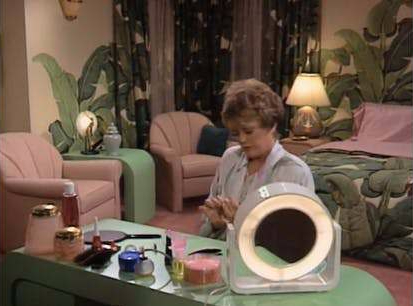 This photo is likely from the last season, possibly the “Beauty and the Beast” episode. There are also only a few things on the table by this time. It looks like the lamps were updated as well. Actually, there’s just one on the bedside table and what looks like a sconce of some kind over the other table. Also note how the banana leaf design carries over from the bed to the wall between the chairs. And of course the curtains! I shouldn’t pass up giving them a mention. It only makes perfect sense that they should be the same Martinique fabric as the bedspread rather than a solid coordinating color.

The dusty rose of the carpet, chairs, closet doors, and even the sheets on the bed is a perfect complement to all of the greenery. It’s a color with an interesting history and one that has become popular again in the last couple of years. Now sometimes known as “Millennial pink,” the Merriam-Webster dictionary defines it as “a variable color averaging a light grayish purplish red.” Not exactly a definitive definition. Pantone offers several shades in this color family and even named its “rose quartz” as one of their colors of the year in 2015. Here are some of the Pantone shades:

I think the shades around Blanche’s bedroom fall mostly in the rose quartz family, but I tend to think of dusty rose as being a lighter shade than Pantone’s version. The shades of the color that are popular today usually have a bit more of a brownish hue to them and are frequently treated as a neutral in the fashion world. Wikipedia offers a fun breakdown of the various shades and names of rose colors and, while the shades will vary on different computer monitors, you can get a good sense of just how much variance there is in the color along with some historical information.

If you’re interested in reading more about Blanche’s bedroom then take your phone or tablet out on the lanai and check out the following links:

One of my favorite blogs, Mirror80, has written several posts over the years about Golden Girls style, including this post that mentions Blanche’s bedroom.

This Apartment Therapy post is perhaps the most extensive analysis of the set. It includes slideshows of furniture and other accessories inspired by the show.

Last year, the queer art exhibition and performance series, Miami Is Nice, even featured a recreation of Blanche’s boudoir for the organizers’ wedding ceremony!

The Benton Art & Design blog and Town and Country Magazine both provide more information and history about the Martinique wallpaper.

18 thoughts on “A Brief History of Blanche’s Boudoir”